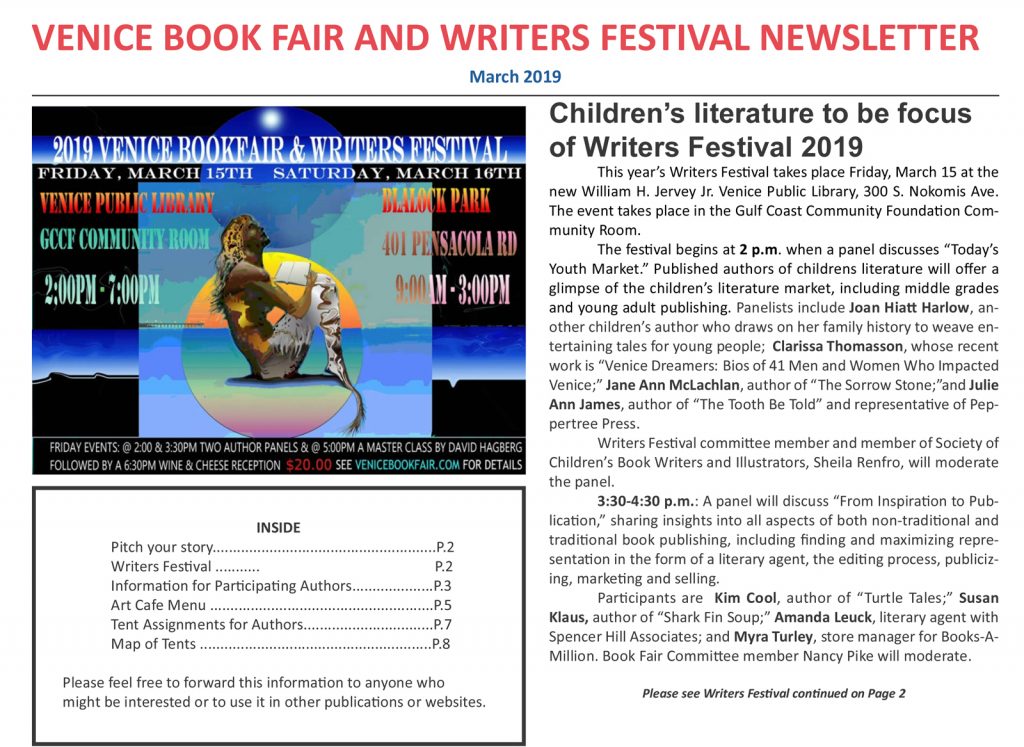 It doesn’t always take a village, A baker’s dozen or so can work miracles

It was only yesterday that a dozen of us or so met in a conference room at Venice City Hall to discuss the possibility of hosting a reading/writing/book fair-type festival in Venice. Most of that tiny group are still
involved.

Pam Johnson, former city information officer, has handled tents and publicity and helped with the website and so much more since the very first day we met.

Former Venice librarian Nancy Pike has worked with securing folks to give seminars to writers and potential writers, for that is something that has set this festival apart from the beginning.

Several different people have helped over the years to secure Interact students from Venice High School to help book vendors haul their books to their tents. Jean Trammel has been the liaison with the Venice Area Historical Society, which is the beneficiary of any proceeds the festival might generate. Don Hay has put up signs, brought in the sound system used to make announcements during the event and then also stayed to make those announcements year after year.

Venice librarian Ann Hall is a more recent recruit but a valuable addition. This year she arranged for our Friday seminars for writers to be at the new library, which also happens to be nearly adjacent to the festival’s new location: Blalock Park. Lawyer Andy Britton has been the committee’s chairman for several years now and an additional helper with the tents and signage and bookmarks and so much more, including procuring space for the seminars for many years. Alex Rotella designed our logo with the mermaid and many posters over the years.

The Venice Gondolier Sun and Venice Magazine have been media sponsors since the beginning. So were Andrea Cooper and Carol Redmond (sp) and James Hagler, who was director of the Triangle Inn. Their lives ended much too soon but they all contributed so much to the book fair. Fortunately their enthusiasm has lived on to keep the rest of us going.

Camille Cline, former editor at Tor, a major publisher of fantasy fiction in New York, hit the ground running when she joined the committee a few years ago. She has presented seminars and also listened to pitches from would-be authors. So have several authors who return year after year with additional books or something new to share in one of the seminars.

Susan Klaus has three best selling books under her belt, raises bulls and thoroughbred horses and is the creator of the Sarasota Writers Group. Clarissa Thomasson is the most prolific Venice area writer with a stack of Little Green Monkey books for children plus a long list of historical fiction relating to places she has lived, including Venice, where she arrived just in time for the first book fair. Her husband Neil not only has
helped her at so many fairs but also has given me a hand at several such events, too. Writer RJ Coons of Venice has not only entertained me with his Blaine Sterling books but also surprised me a few times by naming a character after me in a couple of his books.

Books A Million had a booth at the first book fair, and this year its manager will speak in our publishing seminar, addressing how the store selects books to sell. With the exception of one year when he had a valid note from his doctor, David Hagberg has conducted some amazing classes for fiction writers. He has shared character and plot development ideas as well as how to define the settings in one’s novel. Best of all, he has offered this valuable advice in a way in which one can remember it and use it to better one’s work.

As for the man who started it all — that was Steve Albee, the nephew of Dr. Fred Albee who had a major part in making Venice what it has become. That first Albee hired city planner John Nolen and then sold the
property he had purchased from Honore and Potter Palmer with the Nolen plan to the Brotherhood of Locomotive Engineers of Cleveland, Ohio. I love the way Venice history and its early people continue to influence this wonderful place I have called home for 25 years.

Be sure to come to the fair on Saturday, March 16, from 9 a.m. to 3 p.m. at Blalock Park, and, if you are a writer or considering the purchase of several reams of paper on which to pen your memoirs or the next Great American novel, join us at the new William H. Jervey Venice Public Library for the three classes beginning at 2 p.m Friday and ending with a wine and cheese reception with the speakers at 6:30 p.m. or so. A donation of $20 is requested to participate in the Friday events. 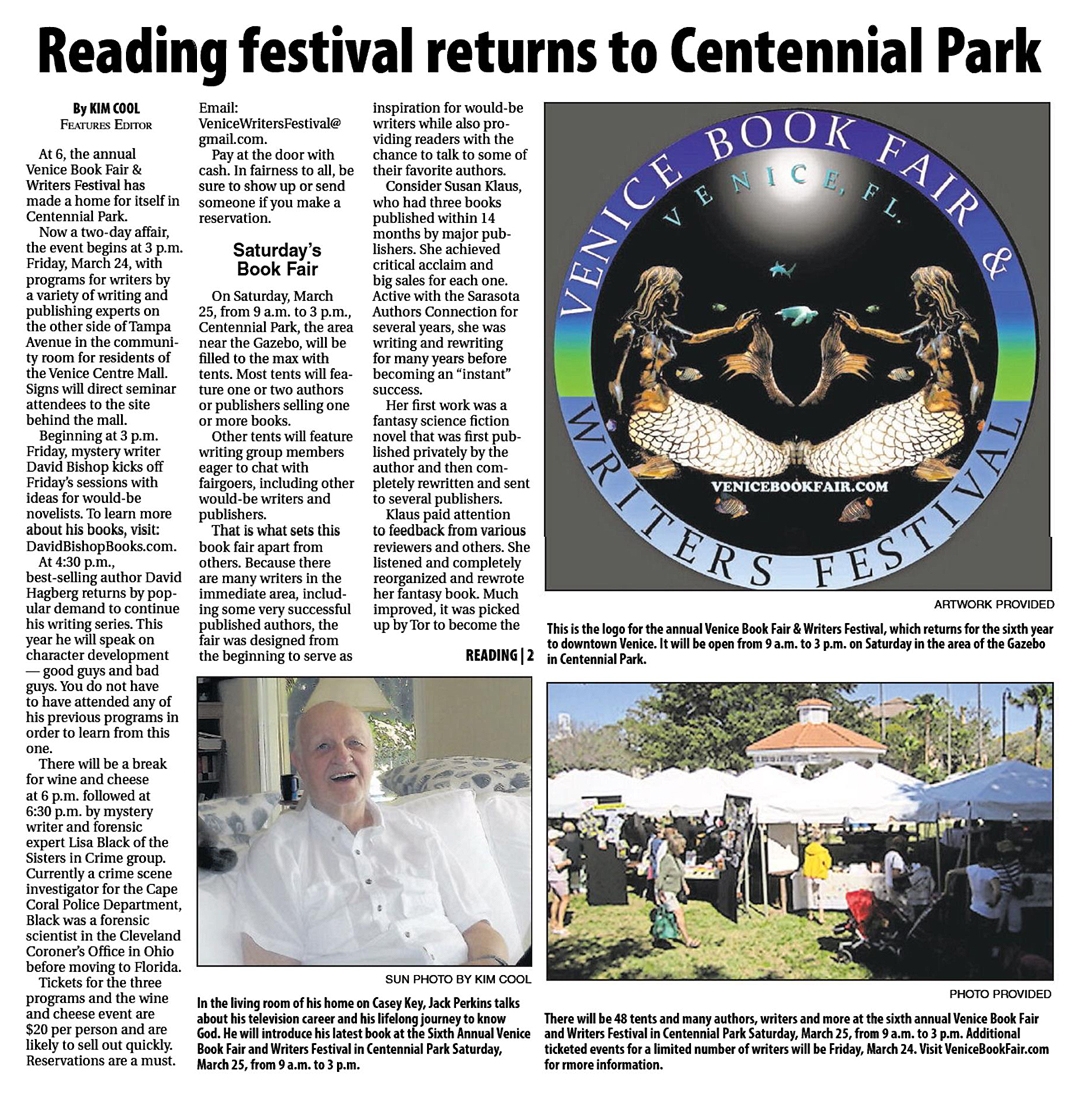 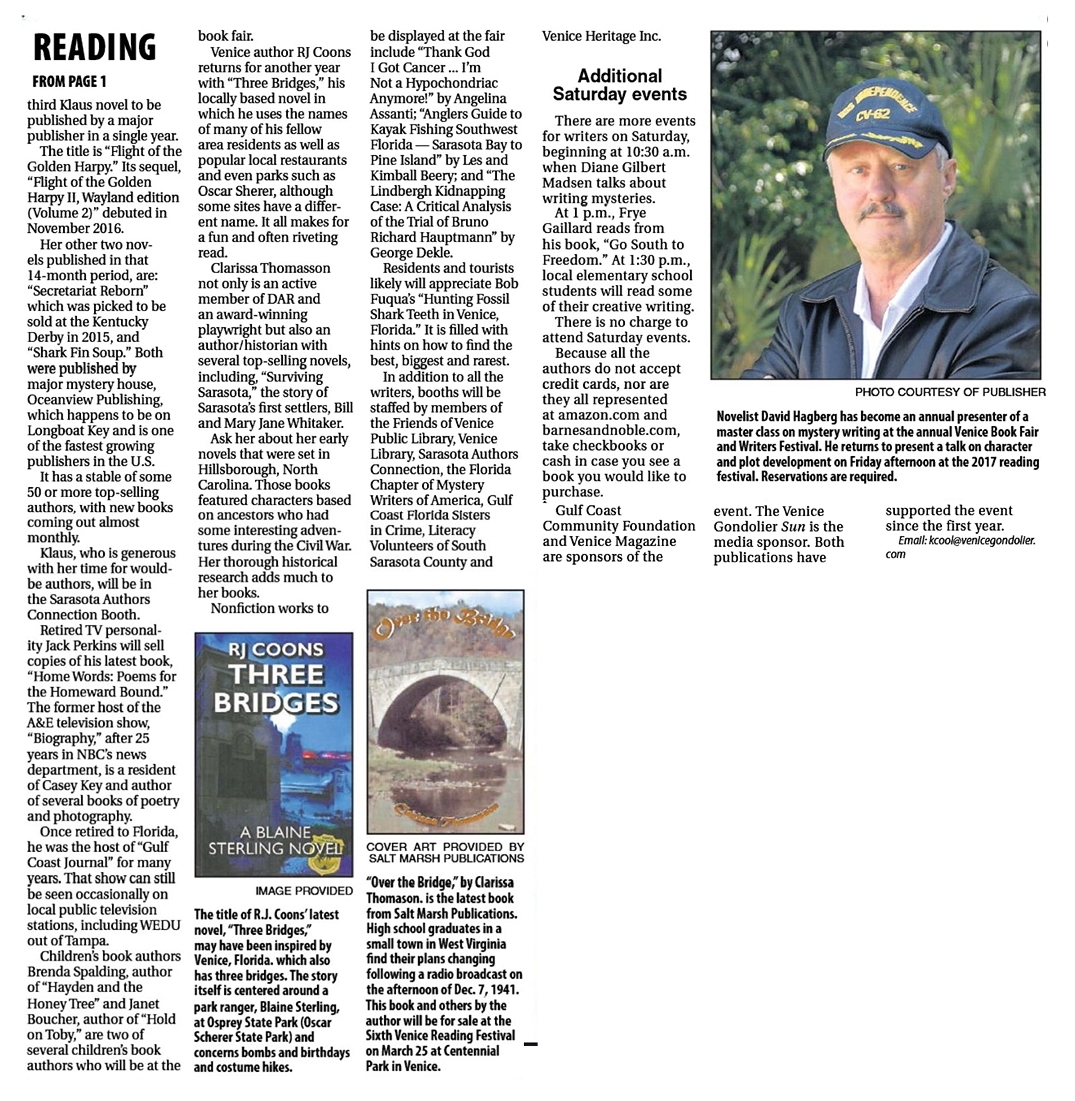 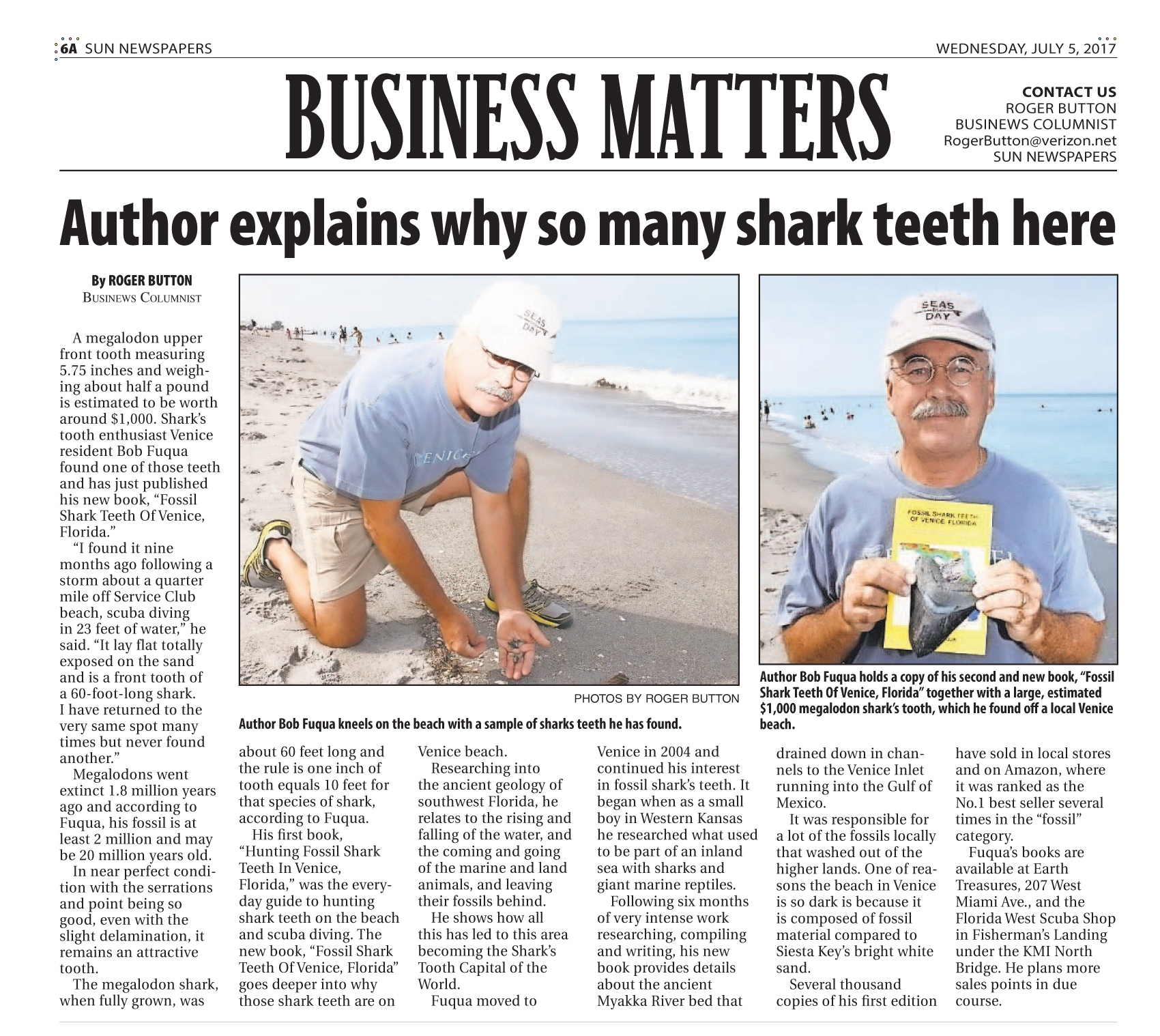 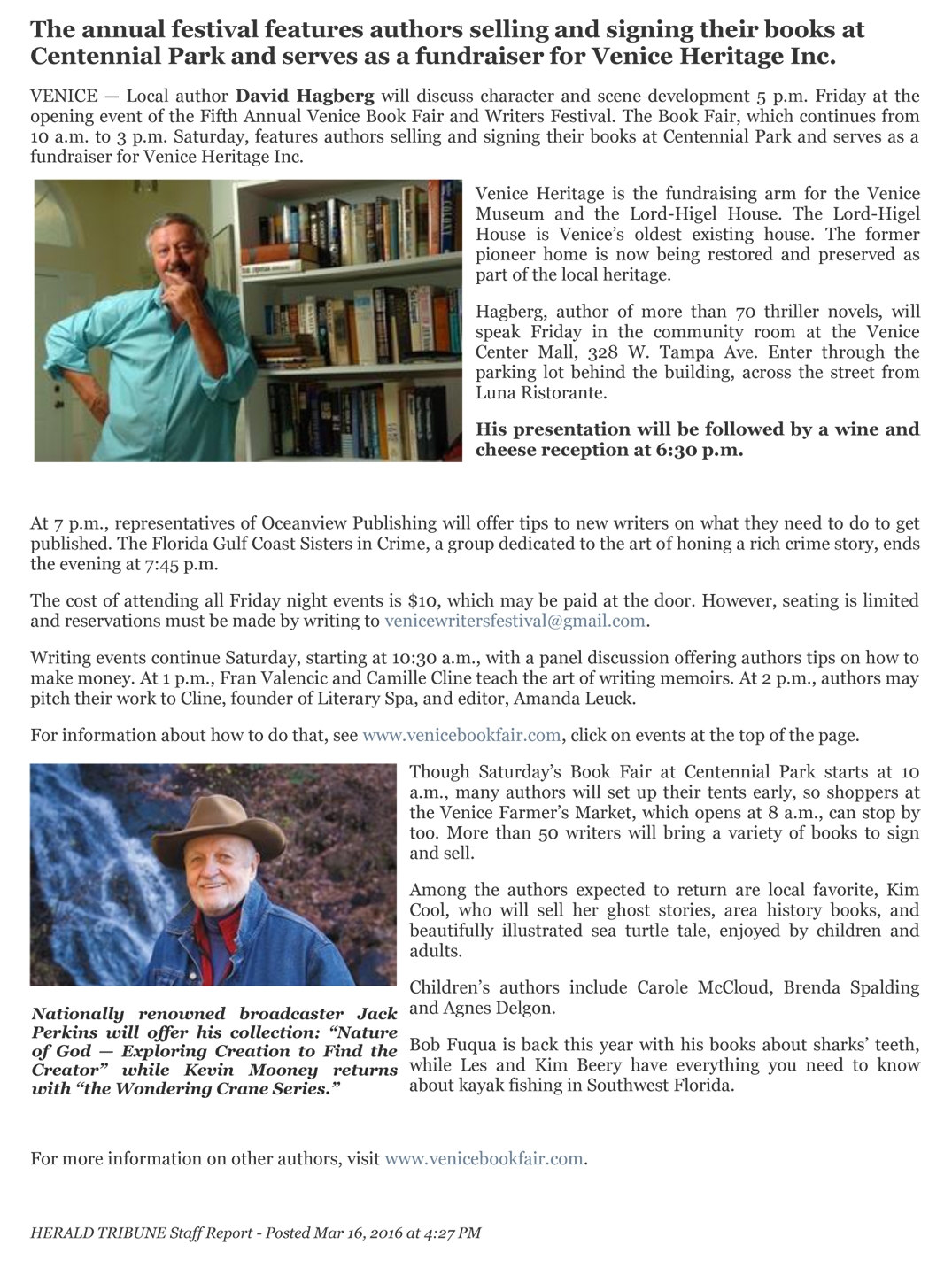